It is one of the most important areas representing the state and nation, history and culture, nature and folk traditions, and its development contributes to the comprehensive development of economic sectors, including services, consumer goods and manufacturing.

That is why the Leader of the Nation declared 2018 in the Republic of Tajikistan as the “Year of Tourism and Folk Crafts” and laid a real legal and fundamental basis for the comprehensive development of this promising sector in the country.

Adoption of this program will lay a favorable foundation for the effective use of opportunities for the development of tourism infrastructure, improving the quality of services, supporting domestic and foreign tourism, attracting investment and training talented personnel in the capital.

It should be noted that in order to present Dushanbe as a tourist image of the country and create favorable conditions for recreation and tourism of residents and guests of the capital in August this year at the initiative of the authorities for the first time Dushanbe Summer Festival “Dushanbe Summer Fest” was held at a high organizational level, involving more than 40 thousand residents and guests of the capital.

Also, in September, in cooperation with the Committee for Tourism Development under the Government of the Republic of Tajikistan, a festival of food and balloons “Colorful Sky – Light” and in December 2018, a festival “Welcome to Dushanbe – the city of dreams” was held in the capital. .

It should be noted that the World Federation of Tourist Cities is one of the most influential organizations in the field of tourism, which includes more than 130 cities around the world.

Location for tourists in Kulob area

The mausoleum and the territory of the mausoleum of this historical figure of the Tajik nation during the independence period have been completely renovated and transformed into a prosperous and beautiful place, where every day thousands of domestic and foreign tourists visit and visit this place.
Mir Sayyid Ali Hamadoni is a well-known figure in the world of science and education, and it is the recognition of the status of brotherhood and equality of people, charity, the role of science, education and public awareness, the promotion of peace, culture of tolerance and tolerance. .
In the Republic of Tajikistan, the center is located in Khojaysok village of “Hamadoni” farm of Kulob district (Hazrati Amirjon Mausoleum). In the treasury of the Institute of Oriental Studies of Dushanbe 52 works of his are collected and stored. Concerts and conferences are regularly held for the thinker and Hamadoni’s legacy is published. In “The Tomb of Hazrat Amirjon” (1991) the guide M. Azizov and R. Asoev published. Hamadoni’s work “Zahirat-ul-muluk”, in the reserve fund of the Complex of historical and ethnographic museums of Dushanbe. Kulob is protected. In the infrastructure of the Complex of historical and ethnographic museums of The Museum of Written and Literary Heritage named after Mir Said Ali Hamadoni is functioning in Kulob city.

The mausoleum of Hazrati Sultan (Sultan Uvaysi Qarani) is located in the village of Mazari Hazrati Sulton, Khovaling district. This village has been prosperous for more than one thousand four hundred years.
The village has been rebuilt and destroyed several times during this period.
The village of Hazrati Sultan is famous for two reasons – firstly, the presence of the mausoleum of Hazrat Sultan Uvaysi Qarani and secondly, the beautiful and unique nature in the country and abroad.
Here we need to provide some information for tourists and pilgrims about the life and life of Hazrat Sultan Uvaysi Qarani.
Amir Sayyid Munki, a member of the Writers’ Union of Tajikistan, has published a book entitled “Hazrati Sulton” in 2016, which describes the outstanding image of the Islamic world.
In Khovaling, if we talk about this village or a nobleman, people call it Mazor, “Let’s go to Mazor or come from Mazor”, which means that he is going to Mazor Hazrat Sultan, or from there, he has returned from pilgrimage
. beliefs call their children Sultan, Sultonbi, Mazari and these names are very common and common. The life of Sultan Uwaisi Qarani, who is considered one of the most prominent figures in the history of Islam, is very instructive.
The biography of Hazrat Sultan Uvaysi Qarani is a vivid example for every person of an exemplary life and a guide to the right path of goodness and kindness.

This facility was built on the basis of direct instructions of the Supreme Leader of the Nation on the occasion of the 30th anniversary of state independence by the Limited Liability Company “Childukhtaron Hotel and Service Centers” with a modern design and compliance with accepted construction standards within a year. 70 people were provided with permanent jobs.
Inside the tourist complex “Childukhtaron” five-story hotel “Childukhtaron” with modern facilities has been built, which can accommodate a hundred people at a time. The new hotel rooms, built in the heart of the mountain, are built in various forms and services are provided in accordance with international standards.
It was noted that the development of the district’s infrastructure and the adaptation of services to the needs of tourism will create a favorable environment for attracting more tourists to the region.
Muminobod district has rich tourist resources and is suitable for the development of mountain, sports, ethnographic and ecological tourism. “Childukhtaron” and “Chashmai Jushon” regions are interesting for domestic and foreign tourists.
In this area, the company “Hotel and Service Centers Childukhtaron” in order to promote national traditions and customs, next to the hotel has built a variety of houses for the reception of tourists in a unique style of national architecture. These houses, designed for domestic and foreign tourists, have all the conditions.
In general, in addition to the commissioning of these houses, a high level of reception was provided in Childukhtaron for 150 tourists.
Childukhtaron area with its beautiful nature, meadows, forests and clear springs has captivated the hearts of tourists. Thousands of domestic and foreign tourists dream of visiting this beautiful place.

Based on Greek, Chinese, Arabic and Persian geographical and historical sources, as well as the richness and diversity of archeological finds, Hulbuk is the capital of Khuttalon with a very ancient history. In all periods of its existence, the city of Hulbuk was considered the administrative, economic and cultural center of the kingdom of Khuttalon. Hulbuk’s urban culture is based on a clear architectural and engineering design with complex communicative structures, an underfloor heating system, removal of snow, rain and wastewater from the palace only after purification, provision of drinking and household water and, most importantly, compliance with the requirements of the city. with the palaces of kings, counties, and rabbis (settlements connected to the city) suburban. Archaeological excavations,

The people of Hulbuk and its provinces are engaged in the production of unique handicrafts such as enameled and unglazed ceramics, glass, crystal, iron products, handicrafts, jewelry, stone carving, bone carving, painting and others. produced at a high professional and technical level and thus met the needs of themselves and the region. The style of Hulbuk murals shows that our ancestors directly preserved the traditions of the fine arts of their past by exchanging the traditions of their ancestors. The direct influence of the natural sciences and geometry in the production of pottery, glass and iron is also very good in the design and decoration of the buildings of Hulbuk Palace and its surroundings. All the paintings are directly natural, with the addition of the talent of Khatlon artists, which embody the unique elegance and beauty. The traditions of urban planning and handicrafts were formed during the Samanid period and have been preserved and developed in later historical periods. Hulbuk is one of the geniuses of material and spiritual culture not only of the Tajik people but also of the world.
These are the high qualities of the city of Hulbuk, which in November 2009 in Xi’an, the cultural capital of China, was included in the UNESCO series of “Great Silk Road” among eight unique monuments of the Tajik people.
Fortunately, through the state independence of the Tajik nation and the wise policy of the President of the Republic of Tajikistan Emomali Rahmon, after thousands of years, the capital of ancient Khuttalon – the city of Hulbuk is being revived today. The Hulbuk Historical and Cultural Reserve and the Hulbuk Museum have been established at the base of the city of Hulbuk in order to honor and respect the history, culture and ancient culture of our ancestors and to revive a high sense of national and patriotic spirit, which is directly derived from the President of Tajikistan Emomali Rahmon. , which in this direction is a serious impetus to the development of history and culture of the Tajik people at the time of independence on the world stage. 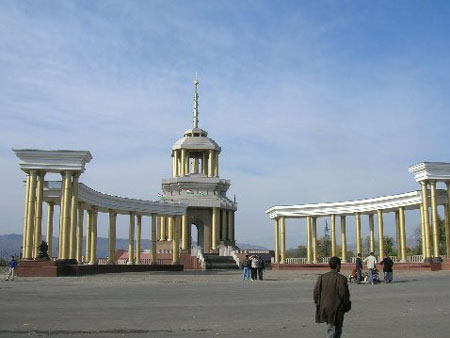 Kulob Fortress  is a historical and cultural monument in  Kulob district .

In the work of Hafiz Tanishi Bukhari “Royal Honor” is quoted. Hafiz Tanish, while describing the battles between the army of Abdullah Uzbek and the Kulob people in 992/1584, provides important information about the Kulob Fortress. It contains all the elements of the medieval city of  Transoxiana and  Khorasan  . It is clear from the description that the city of Kulob of the 16th century was round and had three gates and one window. The gates of the city were directed to the main regions and towns around Kulob. For example, the Chorsu Gate was located on the northern wall of the city, because the town of Chorsu – the present-day town of Muminobod – was located exactly north of Kulob and at a distance of 30 km. The people of Khovaling, Baljuvon and Dahana districts also enter  Kulob city through this gate  .

The Imam’s Gate is located on the western wall of the city of Kulob, from which the people of Khatlon entered the city of the Qariyas of Dili and Imam (Ali), located in the west of Kulob. In the article mentioned above, the village of Imomali, which is located about twenty kilometers west of Kulob, is considered to be the first burial place of Imam Ali Soni, ie Sayyid Ali Hamadoni.

At the Anjirakon Gate, people from villages and towns south of Kulob entered the city of Kulob. Among them, the town of Anchirakon, which is about 30 km south of Kulob near the Panj River and still has the same name, was the largest and most prosperous of all the villages in the region. That is why the gate of the southern part of Kulob is known as the Gate of Anjirakon.

Another important factor was the gate on the east wall of the city, which was connected to the hill. That is, it was not intended for entry and exit, but for emergency use – for example, in a difficult situation to escape through the mountain, and so on.